Free Agents guard/forward Tracy Scruggs (shooting) knocks down a jumper during the second half of the Free Agents 49-30 blowout victory. (Photo by Chase Brostek)

Week seven of Central Oregon Community College’s intramural basketball league featured what might be the game of the year so far–and the standout game of the night, as the other three games included two forfeits and a blowout win. Only two games are left in the regular season as the playoff picture starts to form.

The night opened with Hoop Mixtape forfeiting to the Bucket Getters. The defending champion Bucket Getters have now locked in one of the four playoff spots, advancing to 6-1 on the season. The last game of the night between the last placed Cross Roads and the undefeated Team Couch was forfeited by the Cross Roads, which locked in a playoff spot for Team Couch as well at 7-0.

Following the opening game was a crucial matchup between the fourth ranked Ankle Breakers Anonymous and the fifth ranked Free Agents. The Free Agents dominated from start to finish, using good off-ball movement and well timed passes to keep ABA on their toes defensively.

The Free Agents got out to a hot start, taking an 11-4 lead after the first six minutes. After that, they never looked back, locking down defensively to take a 22-8 lead into halftime. ABA spoiled any chance they had for a comeback in the second half, failing to keep the Free Agents off the offensive glass for second chance opportunities. The Free Agents came out on top of this huge late season matchup with a 49-30 victory.

“I think we had a good team effort…. Our ball movement is pretty good, we did really well on defense, we got a lot of stops, and I’m really proud of our performance tonight.” said Free Agents forward Drew Larsen after the game. “I think we have a lot of potential, we didn’t do so well the last few games, but with every team it has its ups and its downs… we have a strong future looking forward, and I’m very excited,” Larsen added when asked about the future of the team.

The game of the year followed the Free Agents vs ABA matchup. The sixth placed Blockers needed a big win to keep their playoff hopes alive, and third placed FA2 was looking to strengthen their hold on one of the four playoff spots. The two teams battled back and forth for the first 14 minutes of the half, with FA2 holding a slight 23-20 advantage. FA2 took control at the end of the half, taking a nine point lead into the break.

The Blockers took back control with a huge run in the second half, holding a 44-39 lead with 13 minutes left in the game. The two teams struggled to stop each other’s offenses down the stretch, with both teams starting to find their footing from behind the three point line. A huge three from Blockers guard Kolbi Stinnett with just over a minute remaining put the Blockers up 62-59. However, the euphoria didn’t last long on the Blockers bench. FA2 guard Gabe Reed calmly dribbled the ball up the court with 20 seconds remaining, and launched a bomb from 30-feet that connected to tie the game at 62. Blockers guard Owen Collins would get a great look at a game winning three on the final possession, but it came up short, and the match went to overtime.

Blockers guard Owen Collins (0) rises up from deep, but comes up short in what was a rough finish for the Blockers in overtime. (Photo by Chase Brostek)

Gabe Reed came up huge for his team again in OT, hitting a heavily contested corner three to give FA2 a 67-62 lead. The Blockers went cold, unable to fight back into the game and suffering a heartbreaking 70-64 overtime loss. The weight of the loss could be felt on the bench, but forwards Keegan Lahley and Kendal Williams had positive takeaways from their possibly season ending loss.

“I think we’ll learn from it … close game, but we’ll win the next one” said Lahley. “I think we just gotta play basketball, let’s go back to the basics, rebounding, finishing, you know limit transition points … just play basketball” added Williams. The Blockers will need to improve fast, as their 2-5 record means they’ll have to win out to even have a chance at one of the last playoff spots – and the tall task of the undefeated team Couch awaits in their next game.

The opposite emotions could be felt on the FA2 sideline after the huge win propelled them to 4-3 on the season, locking in their third place spot and leaving them one win away from clinching a playoff berth. When asked if he’s the guy who wants to be taking big time shots, Gabe Reed answered while being hyped up by his teammates around him: “I am, yes … everytime a big moment happens you have to think, am I the guy? If you don’t say you’re the guy, you’ll never be the guy, so I wanted to be the guy.”

Each team has only two games left in the regular season. The Cross Roads (1-6) are the first team to officially be eliminated from playoff contention. The Bucket Getters (6-1) and Team Couch (7-0) have locked in two of the four playoff spots, and FA2 (4-3) is one win away from clinching the third. The Free Agents (3-4), ABA (3-4), The Blockers (2-5) and Hoop Mixtape (2-5) will all be fighting for the fourth and final playoff spot, which the Free Agents currently hold because of their tiebreaker win. 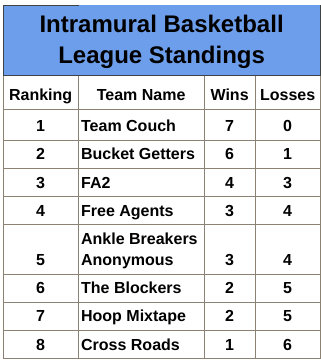 Cadence Kirby November 30, 2022
Art in healing the layers of PTSD

Art in healing the layers of PTSD