While one out of five people suffer from a mental illness, law enforcement officials aren’t always given the amount of skills they need to handle crises involving individuals with mental illnesses. This is why Campus Public Safety recently had two more campus public safety officers graduate from Crisis Intervention Training. 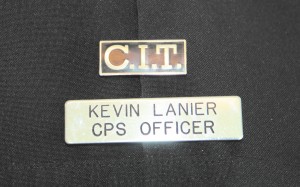 “The chances of you knowing someone who suffers from some sort of mental illness is extremely high,” said Eilene Flory, regional Crisis Intervention Team coordinator.

This brings the Central Oregon Community College CPS department to a total of three CIT certified officers, making it one of the highest at community colleges in the state, according to Jim Bennett, campus public safety coordinator. The three trained officers are Adam Neider, Kevin Lanier and Chris March.

“I am happy to report that this is a focus and that we are able to serve the college with a well trained staff,” Bennett said.

CIT is a model of how law enforcement responds to individuals with mental illness, according to Adam Neider, COCC campus public safety officer. Neider was the first officer in the department to complete CIT.

“The main goal of law enforcement is to protect and serve,” Neider said. “[CIT] is really a comprehensive training that gives law enforcement the skill to deal with situations involving mentally ill individuals more effectively.”

In 1988, the Memphis Tennessee Police Department partnered with local mental health providers to organize, train and implement a specialized unit of police officers trained to respond to community members in a mental health crisis.

“The purpose for this unique approach was to establish a more intelligent, understandable and safe approach to responding to these community members in crisis,” Flory said

The specially trained officers who made up the police portion of the Crisis Intervention Team were police officers who volunteered for the training. These officers were then dispatched to crisis calls that involved individuals with mental illness. Since that time, the program has grown, both nationally and locally, according to Flory.

“Since the implementation of the CIT program in 1988, the concept of having specialized trained officers has grown across the nation, with 2719 programs nationwide,” Flory said.

CIT  became an increasingly crucial part of training in Oregon following the death of James Chasse in 2006. Chasse, who suffered from schizophrenia, was beaten and repeatedly tased by three Portland police officers and sustained massive internal injuries. Three officers involved in Chasse’s case were never indicted for their part in the incident.

“Chasse’s death prompted an outcry in the media,” Florie said, “and forced the Bureau to make changes in how it responds to calls regarding people with mental health problems.”

Following this incident, Portland Mayor Tom Potter instituted a CIT program which cause other cities and counties to do the same.

The Central Oregon program began in 2010 and as of Feb. 2014, organized and presented three 40-hour trainings, using the methods of the Memphis CIT training model.

Flory’s position as CIT coordinator was funded by a Federal Grant – Bureau of Justice Assistance – which was given to fund a Justice and Mental Health Collaboration Program.  This shows the regions dedication to having CIT certified officers, according to Flory.

“We have, however, had law enforcement officers from the tri-county area attend our CIT trainings and hope to include more of them during our next round of training which is scheduled in November 2014,” Flory said.

The training that the officers have is a 40-hour week-long course and is facilitated by community professionals. The training includes training in verbal de-escalation skills, identification of possible symptoms of mental illness, local resource information, education about mental illnesses, explanation of the crisis cycle as well as many other topics.

As part of training, the officers visit local treatment facilities and housing options to allow officers to meet staff and residents not in crisi.

“The training also includes a set aside portion of time for the officers to practice the skills that they have learned through scenarios,” Flory said.