Fast food is an undeniable part of college student culture. Whether it is consumed by a majority of college students or merely exists as a stereotype could be argued, but fast food plays a major role in America’s culture as a whole. In more recent years, many attempts have been made at healthier eating. Subway, known for the motto “eat fresh,”is a fast-food restaurant that is known primarily for its sub sandwiches. Jimmy John’s, which is less familiar to many people, is a ‘gourmet sandwich company’, according to its website. The two sandwich shops have similar menus. But which one is worth your time?

There are two Jimmy John’s locations in Bend, but I went to the one situated in the Old Mill District. On the other hand there is Subway, which has a whopping total of five locations throughout Bend. The most convenient location (for college students) would be the one on Southwest Simpson Avenue, which happens to be only a few blocks down from the new OSU campus (which is currently being constructed on Chandler Avenue). Jimmy John’s, unlike Subway, delivers (with a minimum order of $3.50). So while there may be more locations for you if you prefer Subway, there is also the option of having the sandwich delivered right to your door with Jimmy John’s.

Taste is one of the most important factors of food, more so than price in some cases. I’m a BLT kind of person, so I ordered the same thing at both places. Bacon, lettuce, tomato, mayo, bread. By limiting the number of ingredients, I hoped to better identify what I liked or disliked about each sub. For a footlong sub at Subway I paid $5.50. At Jimmy John’s I got the BLT for $5.25.

So, on to the taste. I noticed that the Jimmy John’s bread, in the incredibly short ride from the restaurant to home, hardened to near rock-like properties. Subway didn’t seem to be too affected one way or another. As I started to eat, I noticed that there was a large difference of taste, even though I ordered the same sandwich, generally speaking. But where the Subway sub was laden with bacon and accented with tomato and lettuce, the Jimmy John’s BLT was crammed with shredded lettuce and tomato and had only a few strips of bacon.

Because of the soft bread and generous amount of bacon, I chose Subway as my personal favorite of the two. 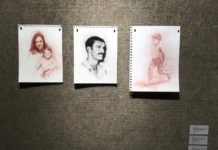