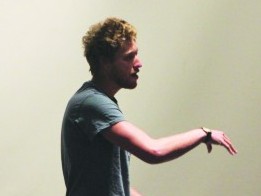 Still a long journey for the KXBC-LPFM Bobcat Radio.
Central Oregon Community College’s station has had a bumpy
journey to get on the air and, even though the school has denied
the radio proposal, many are not giving up.
Jon Bouknight and his wife, Lisa Bouknight, held the first
Arts Aloud event in the Hitchcock Auditorium on thursday
May 7th with two plans in mind: Raise money for the radio station
and showcase creative individuals from COCC. The event
featured seven people with a range of talent: from storytelling
to interpreting a song in american sign language. Everyone participating
in the event, from students to faculty, had one goal in
common: to have the radio station begin broadcasting.
“We shouldn’t have to wait for the school,” said Kelly Lawer,
a student at COCC as well as one of the performers. This
was partly the reason why Bouknight coordinated the event.
Due to much delay, the Media Arts Club has grown tired of
waiting to get the radio broadcasting in order and is taking matters
into their own hands through this event.
“I estimate we need $2,000 to $3,000 for upkeep and maintaining
the station,” said Bouknight. “This doesn’t include the
money needed for an advisor.”
The numbers given by Bouknigh do not account for other
expenses like insurance. Another $1,000 would be needed
for insurance and extra for conferences as well as finding the
space for the station, according to Bouknight.
The idea of getting a student radio station has been in effect
since 2001, an idea that has now been fourteen years in
the making.
According to Bouknight, radio is cheaper and easier to produce
and even broadcast.
“Media arts encompasses everything,” Lawler said. “It’s
any sort of self expression and is important to all students.”
This is a prime example of why Bouknight is working to
not only get the radio live and running, but also to accelerate
the process of getting a Media Arts program for COCC as
there is currently only a Media Arts club.
Bouknight plans to continue to put on events like Art Aloud
throughout the school year and he also wants locate a studio
space to host the station and get students involved in helping
with the content of the radio.
Contact Professor Jon Bouknight to find out more about
COCC’s Radio Station.