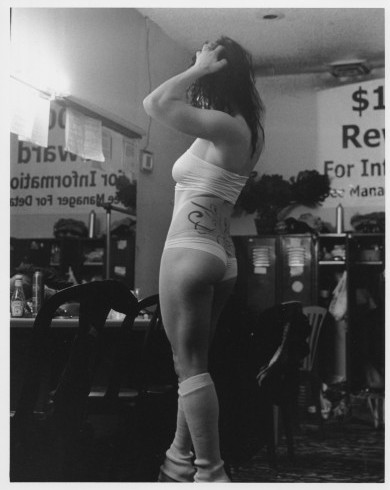 Courtney Anderson and Olivia Haro are doing outstanding artwork in black and white film photography at Central Oregon Community College. They both have an interest in narrative photography, or images that tell a visual story. Both also are interested in the feminine — the female form and psyche. If one believes most art is essentially a self-portrait, then Olivia and Courtney are exploring through their artwork what it means to be female.

Olivia mused, “Having spent over 15 years inside the dressing room as a dancer I brought my camera in to show what I see. We share this world together so it is a deeply personal series to myself as the place is personal to all dancers. I am still expanding the series as I document different aspects of our intimate space. For now, I invite you into our world.”

Olivia’s work is sharp and cool in emotional tone. She offers us a view into a usually unseen milieu. The viewer feels she must know the women by the way she photographs them. Even though they are in partial states of undress, there is not so much a sense of sexiness, although we know they will dance primarily for men who view them from that window. The images suggest something different from what their waiting audience is expecting to see — a quiet and content sense of self-empowerment and strength in the dancer. 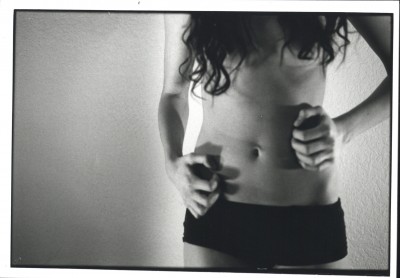 Courtney’s photographs also depict women she knows well. The images are usually posed, but have a relaxed fresh feeling, as though the shot was not planned. The short depth of field gives the images a sense of spontaneity and references film stills from 1960’s French New Wave cinema, with its strong female characters and sense of gritty humor. Courtney’s art has strong shadows and contrast, coupled with a simplicity of composition, which allows the viewer to focus solely on the person. The images often play peek-a-boo with you, daring you to try to know more, see more, of the woman. Details such as the claw-like hands in one photo, and the bra mark in another, shows people who are very real. Courtney commented, “With my photos I try to achieve a simple look that inspires and attracts people… I love a genuine person and a genuine adventure, and that’s what my photos are about!”

Though some people think digital photography is “all that,” darkroom photography is widely respected and growing rapidly as a unique hands-on fine art. The photographs are hand printed on special light-sensitive paper embedded with silver crystals, which gives it the gray-black tones. It takes some time to learn how to shoot and print black and white film, but once students learn it, they are hooked for life.