I felt the blood rush to my cheeks.

“Excuse me, I’m sorry, you want me to put my cheek where?” I laughed nervously.

“On my ass cheek,” Basevi Adamo replied with a sheepish grin. 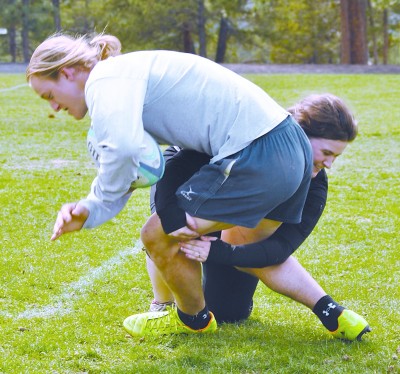 Was he serious? Not only did I have to tackle him, I had to press my face against the back pocket of his shorts? I was completely out of my comfort zone and it didn’t help that my photographer, Perla, was over on the side of the field laughing at the expression on my face.

Basevi’s voice brought me back to the present moment.

“I know, its kind of a shock,” he reassured.

Basevi slowly started walking with the ball as he directed me on what to do. I processed what he was saying as I focused on the task at hand.

“Don’t think about it.” I told myself. “It’s only awkward if you think about it. The rugby team does it all the time and the guys can still look each other in the eye. Just tackle him already.”

As quickly as I thought about tackling Basevi, it was over. We were picking ourselves up from the ground and brushing the grass off our shirts. He and I both laughed. No blood vessels burst, no tears were shed, and I was having fun without physically damaging the person next to me. Rugby is actually a fun sport, and I had a cool teacher who was patient enough with me to learn the basics. Basevi answered my questions and broke down the steps so that I could understand everything that was happening. Rugby has a way of bringing players together in a way that’s different than any other sport I have seen on television. Players from both sides of the field are brought together through comradery with bonds that last even after the final whistle of the match. All of the players are close to each other. Then again, what better way to become close to a person than having to stick your face next to their butt cheek?

In all honesty, if I can manage to play rugby without hurting myself or another person, anyone can play rugby. Its fast, its fun, and it makes you strong. I dare you to try to get into a shoving match with a rugby player. After trying to push Basevi away from the ball, I felt like I was pushing a wall.
I walked away from the rugby field feeling accomplished. At five-foot three, I had tackled a guy who stands about six-foot. Neither of us were injured and I learned a lot about rugby.