With the help of a Criminal Justice cadet and Campus Security, Bend Police caught a custodian for stealing iPads from the college. 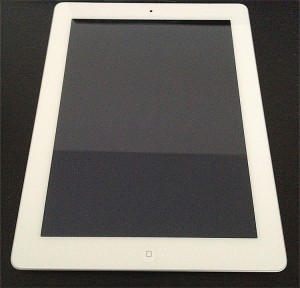 An IPad 4, the model stolen from the Massage Therapy offices, May 25.

A custodian was arrested and charged with the theft of thirteen iPads from a Central Oregon Community College office.
Nathaniel Isaac Estrada was hired as a custodian for COCC in February 2011. He was placed on administrative leave on May 29, according to Eric Buckles, director of Human Resources.
The iPads, tablet computers valued at $500 each, were reported missing Friday, May 25 from the Licensed Massage Therapy offices. The iPads were behind two locked doors and in a locked cabinet.
“There were no signs of forced entry,” said Jim Bennett, interim supervisor of Campus Public Safety and Security at Central Oregon Community College.
The LMT department had 15 iPads total. One was stolen last month, the other was offsite getting an update according to Stephanie Manriquez, director of the LMT program.The thefts impact the department.
“It was devastating,” said Manriquez. “We used them every day.”

When Manriquez first discovered that the iPads were missing, she remotely accessed them from her computer and locked them down. She was able to do this on all but five, which had already been accessed and reset.
Campus Public Safety took the report and contacted Bend police department. They checked local pawn shops. A Criminal Justice cadet found a Craigslist posting listing an iPad for sale.
The Campus Public Safety decided to contact the seller and arrange a meeting to act as a potential buyer.
“Initially the meeting was to determine if this was one of our iPads,” said Bennett. “If it was, we would proceed further.”
The plain-clothes Campus Public Safety officer identified the iPad as one belonging to the LMT department. Other officers were present and observing the situation. While the suspect chatted, Bend Police arrived and made the arrest.
Estrada was arrested on May 29 off of Century Drive on the west side of Bend.
“The investigation at this point is confident in the charges of Burglary II and Aggravated Theft I,” said Sergeant Brian Beekman from the Bend Police Department.
Aggravated theft I is charged when “the value of the property in a single or aggregate transaction is $10,000” or more according to ORS 164.057. The 13 stolen iPads were valued at $6500. As of press time, there was no information available for the reasons behind the Aggravated Theft I charge.
Some of the stolen property was recovered at the time of arrest according to Sergeant Beekman. Manriquez is still waiting for word on the other iPads.
Estrada was released on bail on May 30.