Student government is accepting applications for the paid positions on the 2012-13 school year council.
Applications for the Associated Students of Central Oregon Community College student government elections are due April 26. Any COCC student with a minimum of a 2.0 cumulative grade point average and is enrolled in six or more college credit hours at COCC may apply.
Not many applications have been received as of April 19, according to Gordon Price, director of Student Life; which is something he would like to see change.
“Last year we had 13 candidates, which was huge. It was really encouraging. I would like to see that again,” said Price.
The election applications are for three elected positions on student government. There are also three appointed positions, making a total of six positions on Student Government. Price encourages running for student government, because it’s a great opportunity and a good learning experience just to run.
“I’d encourage any student who wants to have an impact on campus, wants to see a change on campus, or just the experience of working on student government, take the advantage of this opportunity,” said Price. “Plus, it’s a paid position, so not only will you have that impact and make a change on campus, you’ll get paid for it.”

The process of running for an elected position includes applying, attending an information session and campaigning. Elections are facilitated through Blackboard, where students can vote for three students they want to see in student government.
“If you don’t run, get out and vote,” said Price. “Even if you’re not running, you have a voice.”
Kyder Olson, ASCOCC’s marketing and events coordinator was elected into student government last year and is now reflecting on her year in office.
“It has definitely been a learning experience,” said Olson. “It’s taught me how to balance my personal, work, and school life.”
Olson is graduating this spring with an Associate of Arts in Criminal Justice and will not be running for student government the 2012-2013 school year, but gives advice to those who will be working for ASCOCC.
“I would encourage the students to have a balance between work and school,” said Olson. “Otherwise, enjoy it… it’s a learning experience.” 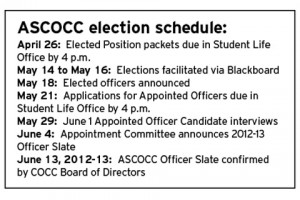 Elected application packets available in Student Life Office room 208 in the upper level of the Campus Center.
For more information, contact the Student Life Department at 541-383-7211