Summer heat made the inside of the single-wide trailer a sweltering mess, and I was stuck to my seat having sweated through my seersucker shorts. The windows were open wide and the hiss of cicadas came through the screen, permeating the humid air with a sinister haze. There wasn’t much to do besides fix refreshing drinks and watch the sun sink down behind the pine forest into the swamp and think of cooler climes. Before it was completely dark and after we had fixed another round, we popped the excellent 1987 film “Predator” in the DVD player and started to watch Arnold Schwarzenegger kill an unknown monster that lurked in the jungle. My friend, Mat, and I started to discuss other monsters that lived in the forests of America and inevitably came to the topic of sasquatch. And just like we were watching a big gelatinous monster, real as life, in the jungles of central America on the TV, we were convinced that sasquatch did exist somewhere in the forests of the Pacific Northwest. It was then we both made a solemn oath that once we were free of the marines and back in the northwest, we would go hunt him, kill him, and bring his corpse into town, once and for all dispelling all doubt that the beast actually exists.

Months later Mat and I found ourselves at a gun show in Portland, Oregon, walking down wide aisles between tables laden with pistols, rifles, muskets and machine guns. But, what we were looking for was an assault rifle made in the former communist bloc: the illustrious AK-47, weapon of choice for the soviet army, child soldiers and revolutionaries everywhere. After deciding which model would suit us best (a Hungarian made paratrooper model with a foldable butt stock), and buying a few hundred rounds, we walked out of the gun show after taking less than five minutes to purchase a semi automatic assault rifle and enough ammunition to get a good start on a coup in any banana republic. We walked back out to my Nissan Maxima encircled by a parking lot full of pickup trucks and Suburbans. Mat took the wheel and I started to load the thirty round magazines with the Russian made 7.62×39 rounds; we needed to be ready at any time to hunt , he could be anywhere, and every minute we were comfortable, in a heated car, sasquatch was out there in the bush getting stronger.

Armed with a topographic map from the US Geological Survey, a days worth of food, and two Hungarian made assault rifles, we entered the dense woods of Gifford Pinchot National Forest in Washington. We followed a poorly maintained logging road for a while and then started hiking up a ridge that drained into a robust creek. The vegetation was thick, dense and green, and the terrain was steep. The creek was down at 1000 feet and the ridge climbed quickly up to about 4000 feet at the summit. In between were many old and new trees, some down and some burned. After hiking for a few hundred feet, Mat shouted from ahead that he had found something. I ran, jumping over logs and avoiding snags, to get to Mat as fast as I could. When I got to him, he pointed to some ferns and brush that had been broken and laid upon. He then directed my attention to a large turd. The large piece of feces looked inhuman and was dissimilar to the small little deer droppings we had seen earlier that day.

We took this at a clear sign that sasquatch was close and we were going to find him that day. We continued up the ridge, about 50 yards from each other. We had picked this secluded ridge because we figured since sasquatch is a mammal, he would need to drink water now and then. And if we chose a point on the map that was remote enough but still near a water source, maybe we would find him. But we were close to the summit and still hadn’t come across anything.

I had just about given up hope when I heard some rustling in the brush just ahead. I paused, so as not to scare it any further, and then began to move slowly and quietly, my rifle at the ready. I moved forward about 20 yards and then a deer pranced out of the dense brush in front of me, further up the ridge. It was not a sasquatch. Sometimes the absurd comes up and slaps you on the face and you’ve got no choice but to shoot back at it. Sometimes, you know the absurd is out there, and you believe it beyond any sort of rational thought and you go out in search of it. But then, you come down from off the mountaintop empty handed and you know, more so now than ever, that sasquatch is up there, lurking between firs and pines, waiting to be coaxed out of the shadows. 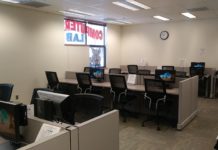