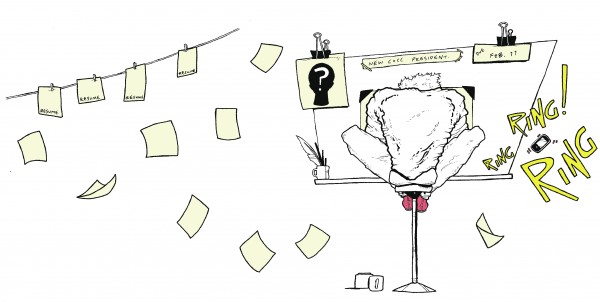 For the second year in a row, the college has begun the search to find the next college president.

After former Central Oregon Community College president, Jim Middleton announced his retirement on April 15, 2013, the college began planning to find his successor. In fall 2013, the college opened the application process for the position and began narrowing down candidates. The college then selected three finalists: Dana Young, Sheila Ortego, and Patrick Lanning. That term, the college announced their top candidate to be Patrick Lanning, later learning Lanning was on administrative leave from Chemeketa Community College for potential sexual misconduct.

The Presidential Search Committee then decided not to hire from the pool of applicants. Instead on April 14, the Central Oregon Community College Board of Directors made a unanimous decision to hire Dr. Shirley Metcalf, current COCC extended learning dean, as an interim president for the 2014-15 academic year and to begin a new presidential search.

“I love the college and the community,” Metcalf said, after the April 14 announcement. “I’ll make sure to give my heart and soul to this job.”

“The organization [COCC] works with has done thousands of searches, and they said that they never had a situation like what we had,” Paradis said.

However, this year the college started the search mid-summer.

“Last year we started advertising about mid-november,” Paradis said, “we hope this will get us a strong pool of candidates.”

But beginning a whole new search comes with a pricetag.

“Obviously there will be expenditures related to the search.  We spent about $12,000 in advertising and of course we will spend money when we bring the final candidates to campus,” Paradis said, “but because we are using the same firm that we did last year, we are not paying the fee since the initial amount has already been taken care of.”

ACCT will continue to assist with recruiting services and engage in recruiting efforts that include national meetings, programs and also at ACCT’s national annual Congress, which will take place in Chicago, Illinois in October.

Tom Barry: Professor of Sociology; former President of the COCC Faculty Forum; earned his bachelor’s degree in communications from the University of Kansas and his doctoral degree in sociology from Kansas State University. At COCC since 2004.

Laura Craska Cooper: Chair, COCC Board of Directors; attorney with Ball Janik LLP; chair of the board of Housing Works; former law clerk for the United States Court of Appeals, Ninth Circuit; secretary/treasurer of the Prineville Hospital Foundation; resident of Crook County since 1998.

David Dona: Associate Chief Financial Officer at COCC; has worked in financial administration for Reed College, the High Desert Museum, Confederated Tribes of Warm Springs and PricewaterhouseCoopers; taught at COCC as tenured faculty member for five years and part-time instructor since 1992; in his current role since 2007.

Theresa Freihoefer: Associate Professor of Business; MBA from Pepperdine University; bachelor’s in business economics from UCLA; department chair of business, aviation and culinary; over 15 years’ experience as a product development manager and marketer at Mattel Toys and Ertl; at COCC since 2007.

Stephanie Goetsch: Former President of Classified Association of COCC; administrative assistant in Information Technology Services; has lived in Central Oregon for 40 years; graduated from COCC in 1992; enrolled in a master’s degree program in education at OSU; at COCC since 2005.

Mike McIntosh: Superintendent, Redmond School District; raised in Redmond and graduated from Redmond High School; associate’s degree in forestry from COCC; served as principal at four schools in the Redmond district; superintendent since 2013.

Vikki Ricks: Member of the COCC Board of Directors since 2013; taught elementary school and served as a reading specialist, in Idaho and Oregon; worked for the Oregon Department of Education on the “Reading First” Team and as a K-3 Literacy Leader; monitored districts for compliance with federal programs and state standards.

Vickery Viles: Director of the CAP (Career, Academic and Personal counseling) Center; earned her bachelor’s degree in art history from Mt. Holyoke College and her master’s degree in adult education from OSU; has served in several capacities at COCC, having worked for the college since 1989.

December 17 – Board approves names of finalists

Week of February 2 – Visits to campuses of finalists

Starting the search for summer jobs